In my old neighborhood, back in the day, and not really that long ago, it was a familiar sight to see a blue-uniformed law enforcement officer running past us street kids to reach a special phone mounted on a light post somewhere on the block.

If it was an emergency, he flew by, shoes pumping that pavement, red-faced and breathing heavily. Sometimes, the phone he reached was broken, and so he continued running at top speed, undaunted to the next block. Us kids would observe his mission with rapt attention. It was even worth delaying the street stickball game to enjoy the new show.

We watched him as he finally found a working callbox, then animatedly talk fast into the receiver in the language of cop-speak.  If it were an urgent call for assistance, some minutes later his fellows would come barreling down the street, sirens blaring and blue lights flashing.

We called that state-of-the-art policing back then.

And on a related note: tampering with those callboxes was a city kid’s version of afternoon joy. The makeshift bats from our stickball games usually took a callbox down after five minutes of studiously thrashing it.

All us kids knew that if the guy on that phone was wearing jeans and a baseball cap, he was an undercover cop, not so much undercover anymore. We found it quite amusing to tease the guy about his clever disguise, which probably led to his transfer to another precinct.

Fast forward to the present and note the pole-mounted police phones have disappeared from the streets.

Their poles have now transformed into the neighborhood’s bulletin board, announcing everything from upcoming street fairs to cheap roof repair services to missing pets.

Today. no longer depended on finding working pole-phones, policing is a new and different world in so many ways. Communication may be the most significant improvement. And two-way radio communication is especially transformative.

The amazing changes brought to police communications in the electronic age are beyond breathtaking. We’ve watched the swift progression from pole-mounted call boxes to bulky two-way radios clipped awkwardly to belts on officers’ uniforms.

One of the greatest communication changes for both local law enforcement and FBI is manifested in the two-way Motorola radios worn routinely today by officers. It truly allows for far more effective law enforcement. The small size of two-way radios can clip comfortably to uniform collars, allowing instant communication from police to 911 dispatch centers.

Average response time can now be calculated in seconds, rather than minutes. Ultimately. the quicker backup makes for more competent and confident policing, as the amount of danger to all the individuals involved is greatly reduced.

In recent years the need for undercover policing has increased as a result of the spike in terrorist activity. Undercover police units are responsible for keeping the public safe from acts of terror. Effective two-way communications are an integral part of operations that assists counter-terrorism police teams.   While electronic two-way communications have enhanced regular policing dramatically, it is even more transformative in the job of an undercover agent.  Our new breed of an undercover cop, both FBI and local law enforcement units, are a lot safer these days, and far more likely to make it home at shift-end than ever before.

The undercover agent can now ease into situations that were impregnable not so long ago, made possible by the advancement of new communication devices. The technology advances can allow infiltration of noisy venues, cozy gangster cliques, and more. The radio earpieces filter out background noise and offer consistent clarity while remaining discreetly hidden enhancing successful covert operations. 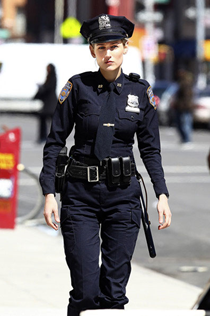 Nearby backup teams can hear in real-time via the discreet earpiece if a colleague is in imminent danger and provide help in seconds. Inconspicuous two-way devices are an integral part of the agent’s safety equipment and vastly increases the likelihood of law enforcement agents going home safely at the end of the workday.

Undercover law enforcement officers today have a variety of communication requirements. But while their needs are diverse, the need for personal safety trumps everything else. Instant, consistent and clear transmissions to their backup teams are non-negotiable requirements to help reduce local crime and antisocial behavior. Undercover police can also rely on these body radios for position tracking as well as monitoring threatening situations.  Again, let us all go home safely every day.

A good example of the best modern technology is the digital Motorola XTS2500. A police favorite, Motorola XTS2500 comes equipped with crisp, continuous, high-quality communication, built-in GPS tracking, is lightweight, and is virtually undetectable when worn with regular clothing, necessary in undercover assignments.

Additionally, the APX6000 earpiece is a discrete and flawless accessory assisting in promoting the safety of law enforcement on the job.

And that saves lives.